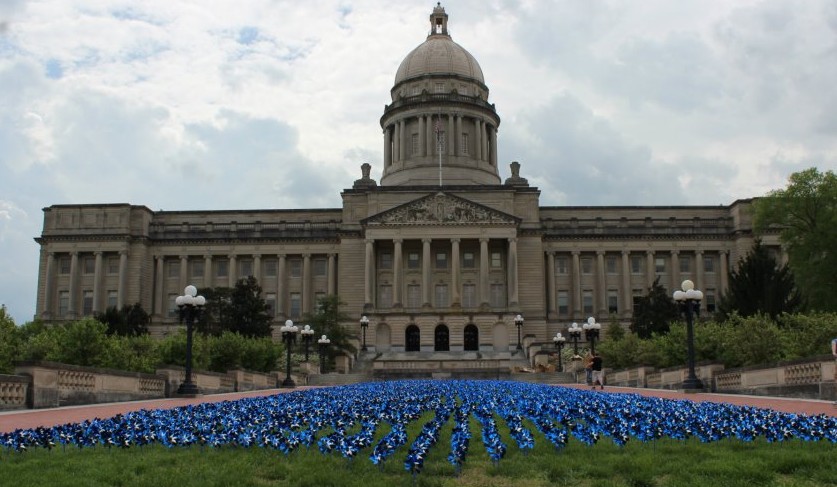 10 May Pinwheels at the Capitol

Posted at 14:36h in News and Events, Uncategorized by @cacadminSB 0 Comments

Thousands of Pinwheels Fill the Capitol

FRANKFORT, Ky. (AP) — More than 5,000 silver pinwheels glittering on the front lawn of the state Capitol Thursday represented child victims of sexual abuse served by the children’s advocacy centers across Kentucky in 2011.

The pinwheels were part of a celebration of hope and healing that was part of the National Children’s Alliance’s ONE With Courage campaign and coincided with April’s designation as Child Abuse Awareness Month.

Meghan Wright, state coordinator of the Kentucky Association of Children’s Advocacy Centers; Laura Kretzer, the association’s board president; and Chief Deputy Attorney General Patrick Hughes spoke at a rally on the front steps of the state Capitol on Thursday afternoon to call attention to the problem of child abuse and efforts being made to deal with it.

Wright said that the 5,035 pinwheels signified the children who had been helped by the state’s 15 advocacy centers in fiscal year 2011, but were “only a sampling” of the thousands of children whose lives have been forever changed by abuse.

“Today we mourn for innocence lost, and it’s important that we begin there,” Wright said, adding the pinwheels signify the children had the courage to tell someone. “And because they told, we are able to celebrate the triumph of healing we have seen in their hearts.”

Kretzer described the work the children’s advocacy centers do in providing services for the investigation, treatment and prosecution of child sexual abuse cases. In 2001, they provided 3,183 forensic interviews and 1,021 medical examinations.

Hughes thanked the children’s advocates for their contributions and discussed his office’s efforts to fight child pornography and cyber-crimes against children.

Wright thanked the advocates’ supporters and partners, including legislators for their work on several child abuse bills during this year’s session of the General Assembly.

Two bills in particular stood out, she said: HB 519, which would broaden the definition of incest and raise the age of consent from 16 to 18 in some cases, and HB 350, a bill regarding human trafficking.

Both bills are “still on the table,” and she and other advocates hope they will pass on the last day of the session, April 12, she said.

Rep. Mike Nemes, R-Louisville, the sponsor of HB 519, was among those attending the rally.