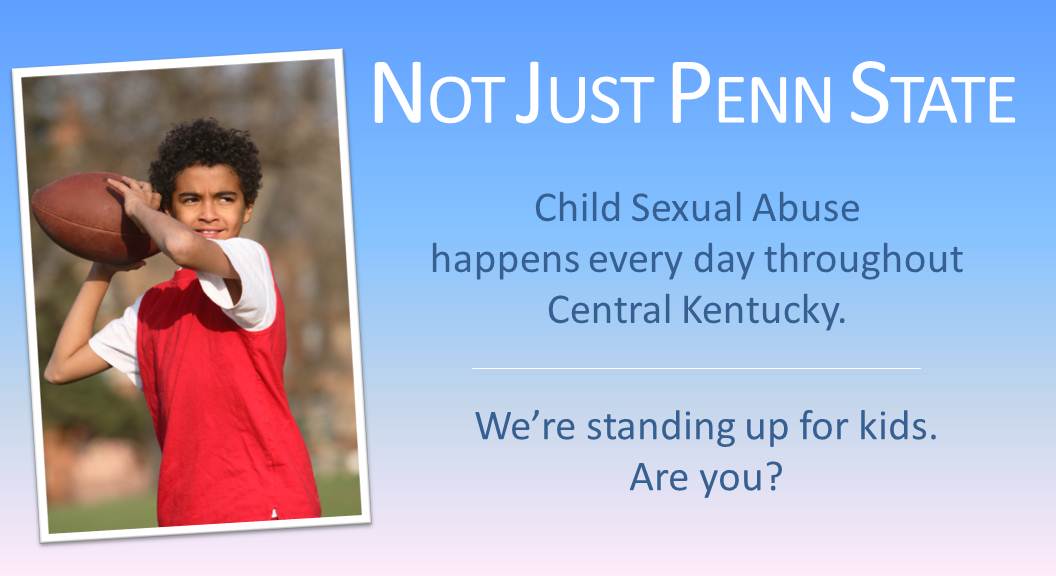 Posted at 18:43h in News and Events, Uncategorized by @cacadminSB 0 Comments

This editorial appeared in the Lexington Herald-Leader on November 13, 2011.
By Andrew Oliver

The details contained in the 23-page grand jury report are so graphic and stomach-turning that many media outlets have chosen not to report the alleged acts.

Jerry Sandusky, a prominent coach and trusted mentor, now stands accused of raping eight children over the course of a decade. Since his indictment last week, at least two more individuals have come forward to accuse Sandusky of sexual abuse. The number of victims will surely rise in the coming days.

What happened at Penn State University is a tragedy of epic proportions and the emerging details suggest a widespread cover-up. A coaching legend, his athletic director, and university administrators all failed to intervene and report eyewitness accounts of abuse, and made no attempt to identify a child victim allegedly sodomized in their locker room.

Their inaction undoubtedly ensured that countless other children would suffer a similar, terrifying fate.

It’s easy, but not productive, to vilify Penn State and the culture of secrecy which allowed this to happen. It’s also shortsighted because this issue is bigger than the university. Child sexual abuse — the kind that’s every bit as horrifying as what is alleged at Penn State — happens every day in every community across the country.

The statistics are shocking. Nationally, one out of four girls and one out of six boys will be sexually abused before they reach their 18th birthday. What’s worse? Only one in 10 will ever tell.

Despite our outrage over the inaction in Pennsylvania, most of us never do anything when confronted with child abuse. A recent national survey found that only 26 percent of Americans reported child abuse when they witnessed it. The reasons for failing to report varied greatly. Some people didn’t know who to call and others felt it was none of their business.

Kentucky law explicitly states that anyone who suspects abuse or neglect of a child has a duty to report it.

If the Penn State tragedy can teach us anything, it’s that all adults have a moral and ethical responsibility to report suspected cases of child abuse, and to intervene if abuse is witnessed. The fulfillment of any legal obligation, which varies by state, is not a replacement for exercising a moral responsibility to ensure children are safe.

A child’s safety is an adult’s responsibility. Children cannot and should not be expected to protect themselves.

All adults should learn the signs of abuse and to be vigilant in protecting children. The biggest indicator that a child is being abused is if he or she discloses that abuse has occurred. Other signs include changes in behaviors (eating, sleeping, school performance, etc.) and unexplained injuries.

Some children display risk-taking behaviors and others may display inappropriate sexual behaviors. For more information, check out D2L.org and onewithcourage.org.

Sex offenders are clever about finding opportunities to gain access to children. They’re skilled at manipulating adults to lower their boundaries about contact with their children in the same way that they groom children for sexual contact. We spend a lot of time talking about “stranger-danger” but the reality is that sexual abuse is overwhelmingly committed by someone the family knows and trusts.

Parents should sense a red flag if any adult — a friend, coach, minister, teacher, or family member — seeks to spend significant amounts of time alone with their child.

Kentucky is fortunate to have 15 regional Children’s Advocacy Centers which provide comprehensive services to children and families affected by sexual abuse. Additionally, these centers are available to help community members learn more about protecting children and responding effectively to sexual abuse.

It’s evident in Pennsylvania that someone — anyone — should have done something. Children everywhere are counting on adults to speak up for them, so that this never happens again.